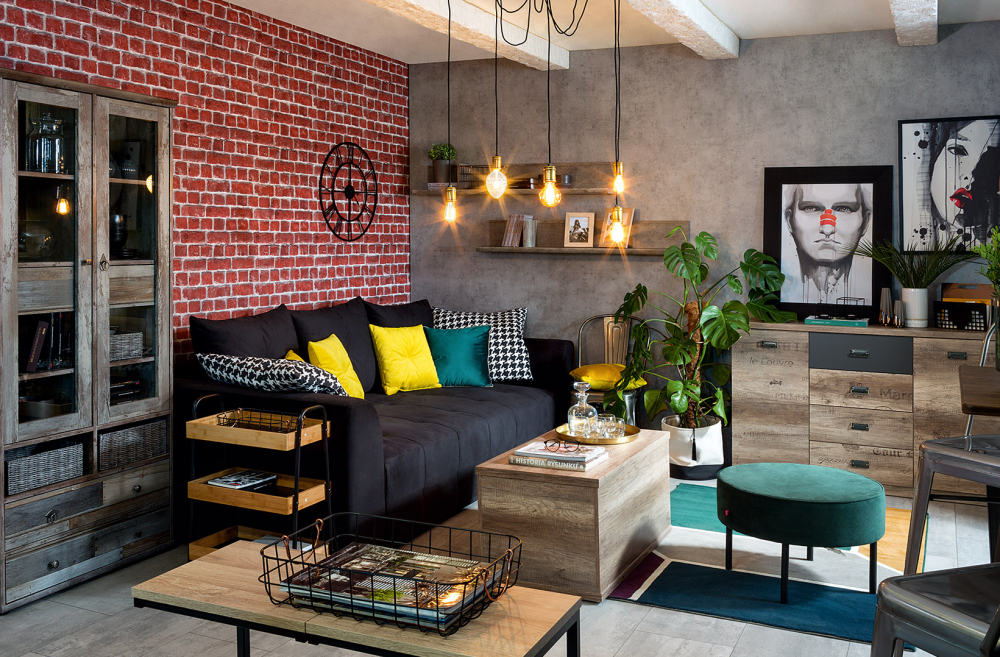 15 Ways to Deal with Low Ceilings

Low ceilings overwhelm your interior? Use our suggestions to optically "extend the room up" or, on the contrary - turn the bug into a feature by emphasising the low ceiling for effect.

The right choice of colours will allow you to camouflage a low ceiling or create an illusion of height.

2. Paint the walls in a darker color. In small rooms, it is better to avoid large areas of uniformly dark colours, but simply choosing a shade a few tones darker will give the desired effect.

3. Create a diagonal on the wall. In this way you will get not only an interesting decorative motif, but also an optical effect of increasing the height of the ceiling.

4. Camouflage the ceiling using the same (light) shade on the walls and ceiling.

5. Paint a wall or walls with vertical stripes. Other vertical graphic elements have a similar effect - paintings or other decorative elements in vertically elongated frames, or narrow panelling painted in the same color as the wall above.

6. Instead of struggling with the effect of a low ceiling, draw attention to it: paint it in a dramatic, expressive color, lay wallpaper or decorate with ornaments or patterns (what about golden stars against a dark blue sky?). This option will work better in rooms where you do not spend long hours, for example in a hall or spare box room.

7. Another effect will be achieved by tenting the ceiling. Use suspended draperies on the ceiling itself, or take up part of the walls too. It is true that it will lower the already low ceiling, but the lines of draped fabric creating the canopy / tent effect will guide eyes up and allow you to create an interesting design, for example in the Oriental or safari style. Lighting mounted behind the canopy will enhance the final effect. It's the perfect solution for a bedroom, a living room or a low-ceiling sun-room.

Let there be light

Adequate lighting is an even better remedy for the problem of low ceilings than colour tricks.

8. Avoid large pendants and chandeliers, especially hanging centrally and directing the light down.

9. If you must have ceiling lights, suspend them on short cords or mount directly on the ceiling or flush/recessed.

10. An uplighter is definitely a better option, preferably in the form of wall sconces or standard lamps.

11. If you want to install pendant lights, suspend them relatively low, above a table or a sideboard. Alternatively, instead of diverting attention from the low ceiling, use it to create the original effect by hanging a series of pendant lights at different heights in a corner of the room.

A few other tips

12. Low furniture creates the illusion of height - sofas, armchairs and occasional tables close to the floor, as well as ottomans, cushions, bean bags or other floor seating will work perfectly here.

14. Hang pictures and other wall decorations higher than 'normally'. They will guide the gaze up and thus create the impression of height.

15. Divert attention away from the ceiling, emphasising the floor. A dark basic surface on which you can place a colorful, interesting rug is a good solution for the living room. In other rooms, a high-gloss floor (concrete, ceramic tiles or even glass) will work.

ALL RIGHTS RESERVED TO CJC FURNITURE